At the 12th symposium on "Plant, Labor and Environmental Safety", which took place from 05 - 06 November 2015 at Köthen Castle, the Adolf Martens Foundation e.V. awarded the prize for the best poster to Dr. rer. nat. Ronald Zinke of the IAUT and master’s degree students Florian Köhler and Felix Urich (both of the "Safety and Security" degree program) for their poster on "Empirical Pool Evaporative Models, a Suitable Tool for Fault Releases?".

Deutschland-Stipendium Recipients for the Winter Semester 2015/16

(Process) Technology Explained to School Students in the Harz 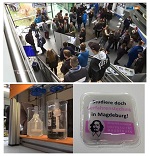 This year's Technology Day took place at the Innovation Center Wernigerode on 29 November 2015; and the FVST was on site with a team from the Department of Process Systems Engineering to explain in particular on “process” technology to over 400 students from the Harz district. 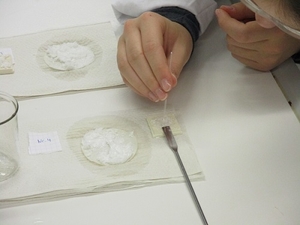 To comply with the contents of MINT subjects outside of the classroom for ÖDG Magdeburg students,  in early summer the FVST’s Chemical Institute (ICH) and a teacher from the Department of Chemistry had agreed upon an experiment, intended to bring all 10th grade students to a lab day at the OVGU.

For one week, 14 very interested students from Saxony-Anhalt, Lower Saxony, Saxony, and Brandenburg visited Magdeburg not to just peek through laboratory doors from the outside, but rather be a part of the action themselves and, for example, produce crystals, precipitate color pigments, color cells, build robots, and program computers as part of the "process engineering and technical cybernetics" internship for secondary school students.